Guess what I finally found?

The Paw Paw Tunnel! I was here once as a kid, like 30+ years ago. I thought it was cool and have always wanted to go back. 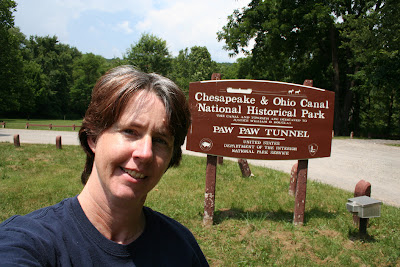 Back to that tunnel... I hadn’t ever really looked for the thing. But now that our place is finished and we have so much time on our hands, we actually get to do cool stuff like explore.

I drove to the WV place on Thursday night with the doggie girls (I had Friday off). Since Hubby wouldn’t be arriving until Friday evening, I set out that morning to do a bit of exploring by myself. One of my goals was to find the tunnel.

I didn’t actually go to the tunnel. It’s only a 0.6 mile walk from the parking lot. But it was hot. My head was already all sweaty, hence the lovely hairdo, I was wearing black jeans and heavy leather biker boots. I thought of my friends who, the previous evening, had asked why I didn’t just take pictures of myself. Actually, I thought of that before I left and switched to an appropriate lens.

I found a cool road on the way to Paw Paw. From there, I went over to Berkeley Springs via yet another very cool back road. Both were a bit rough as far as road surface, but it felt like I was riding through a cool (as in temperature) forest. I didn’t spend much time in Berkeley Springs. It was hot, as I said earlier, and the traffic on 522 was backed up in both directions as far as I could see.

On the way to Berkeley Springs, I stopped near Great Cacapon (the town) and took some pics at the Cacapon River. 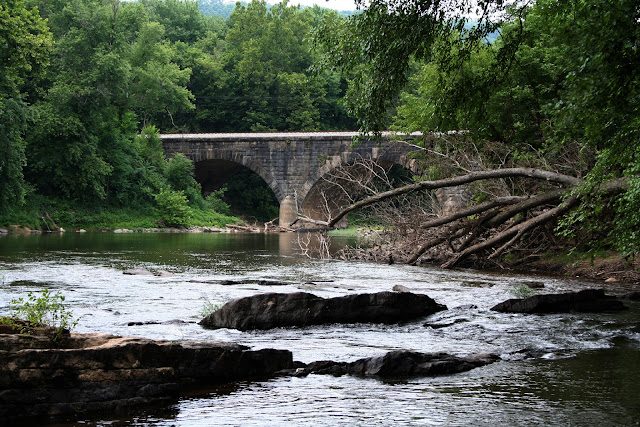 This is actually a train bridge. 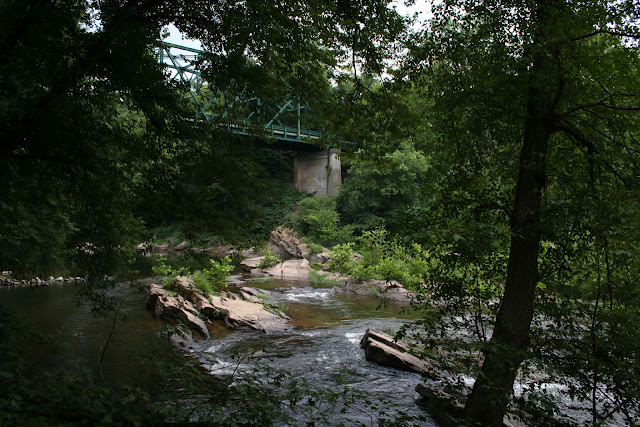 This is the road bridge on Route 9 just outside of Great Cacapon.

As for the return trip, just west of Berkeley Springs on Route 9, I stopped at a neat overlook. 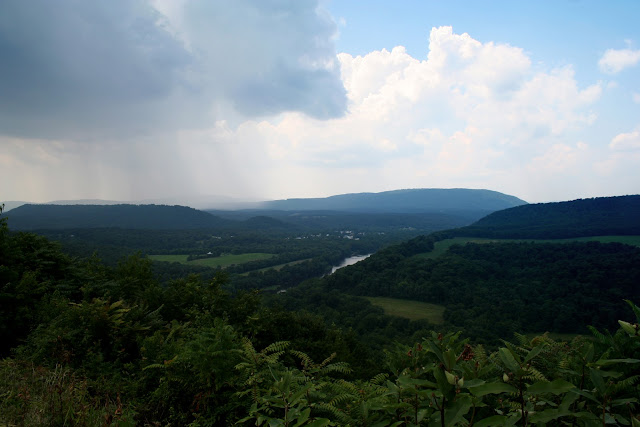 The town you see in the distance, to the left of the river, is Paw Paw. That’s the Potomac River, by the way. The land to the right of the river is in Maryland. I was actually headed almost back to Paw Paw via Route 9 this time. 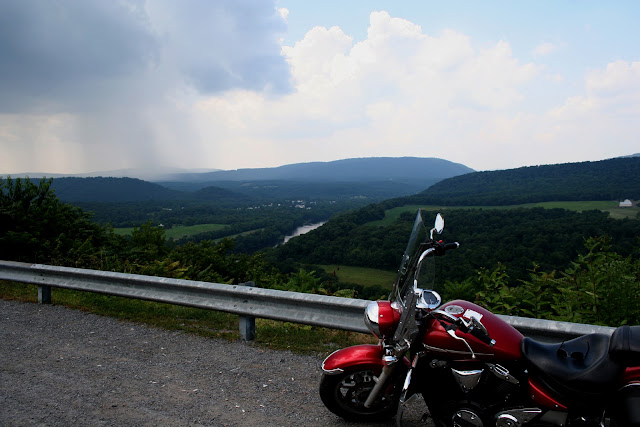 I couldn’t decide which picture I liked best, with or without the bike, so I posted both.

Can you guess what happened after I left the overlook?

I got rained on. It didn’t last long, though. And even though I got pretty wet, it actually felt kind of good since the day was pretty hot. And I dried out relatively quickly, too.

I made a Google map of the route for you. It's HERE. I added a note to the map that says this: "An alternate route that ROCKS if you have 30 extra minutes on the way back to Romney is to turn right from 29 in Slanesville onto CR-3/Springfield Grade Road. At Jersey Mountain Road (CR-5) turn left and ride as fast as you can (LOL!) through the many smooth twisties. When you hit US-50, turn right to get to Romney."
Posted by ToadMama

Wow. Your beautiful pictures and charming commentary are so enticing. Here, even the name of the place is adorable.

Your posts keep giving me reasons to head south!

Ralph, Paw Paw isn't nearly as cute as its name. The area is a bit depressed and Paw Paw itself is really small. Check out this Wikipedia entry: http://en.wikipedia.org/wiki/Paw_Paw,_West_Virginia. It's still a great ride destination. There's a good sub (hoagie/grinder/submarine/hero) shop in town, too. So we go there often. I hope you do come south this year. I have lots of cool roads to share. :-)

That rain coming in looks like it would have soaked you.

I've actually been through this neck of the woods after stopping to see the Muffler Men & all of the other funky stuff on Winchester Grade Rd. in Unger.

Have you been? If not, it would make for an interesting detour one day. http://www.roadsideamerica.com/tip/3699

Love the color of your bike~

Fuzzy, I did not know about the Farnham Colossi. How awesome! That's no detour, that's a destination! I'll have to dedicate that post to you. :-)

That's not far from our place at all.

The overlook is not of Paw Paw but of Great Cacapon.

Thanks for setting me straight on that one. :-) 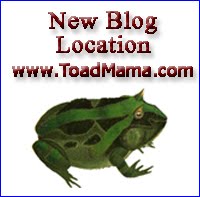 Other Moto Blogs to Read